Bruce Menin – Playwright, et. al.
When we asked Bruce Menin to tell us a little about his life, he smiled, looked down and said, “Well, it’s kinda boring.”
It’s not. Not by a longshot. Bruce has been a naturalist, a member of an emergency outreach team for those suffering from mental health issues, an eight-time Newburyport elected official, a nonprofit administrator, freelance writer, educator, actor, and award-winning playwright. He’s also a self-confessed non-compliant, sometimes obnoxious, independent thinker who takes pride in not coloring within the lines.
Bruce’s plays have appeared three times in the Firehouse Center for the Arts New Works Festival, plus the upcoming 2020 Festival, in every Random Acts event since 2005 and, most recently, in TASN’s Short Play Festival. He’s a busy guy.
Driven by a “can do” attitude, Bruce says that he believes that people should not put arbitrary limits on themselves. “Just because you didn’t study writing in college,” he says, “it doesn’t mean you can’t write a good play. It’s never too late to write or act, or do any number of things. People should pursue their interests – and never hold back.”
His “Writing a Ten-Minute Play” class, is a perfect example. “If someone comes to me and says, ‘I’ve never written a play, but I’d like to try,’ I tell them that they are welcome and we’ll help you write that first play. And we’ve turned out some pretty good first works.”
Bruce is currently teaching his third “Writing a Ten-Minute Play” class at the Actors Studio. The culmination of the six-week course will be staged readings of the plays at the Actors Studio on Tuesday, November 26.
Staged “retro radio” performances have become another pursuit for Bruce. “I did a little radio work in college,” he says. “It was a comedy show we worked on during the week and then aired on Friday night. I loved it!” He brought a suite of 1930s and 1940s radio performances to life as part of last year’s Women’s HERstory Month events. It was a great hit.
On December 7 and 8, his Old Fashioned Radio Hour Christmas Show should also be a (Christmas) stocking full of fun. “One of the special things about the show is that, not only does the audience get to hear the performance,” he explains, “but they also get a glimpse at what it might have been like in the studio while the original actors were reading the script.”
Bruce is anything but boring – and his classes and the performances he produces are always engaging. 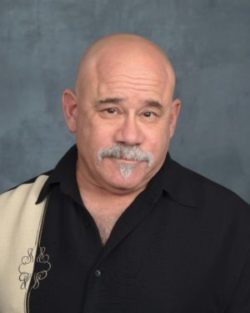