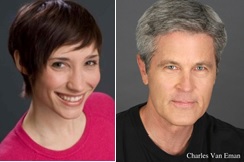 *Become a better listener (to others and to your own ideas!)
*Learn to access your playful nature!
*Find your funny!
*Brush up on Improv skills and meet new people in your community!

Improv Chops- We will cover the basic “rules” of improv such as listening, Yes-Anding, and finding truth in comedy through a series of improv games and exercises over 5 weeks. We will explore the two-person scene. This course will culminate in a performance open to the public!

Sara Fisher is a graduate of the Second City Chicago Music Conservatory and iO Chicago’s Improv Program (Formerly Improv Olympic- where Tina Fey, Amy Poehler, and Mike Myers received their training). She founded and performed with: ALONE! Music Improv and P.S. Music Improv- Based on Your True Confessions, throughout Chicago. She trained in NYC at Circle in the Square and through Physical Acting discovered the art of Improv. She took her first Improv Class at The Improv Asylum in Boston. She is thrilled to return to the amazing creative community of The Actors Studio of Newburyport!

Charles Van Eman brings his years of improv experience from New York and Los Angeles as well as his career-long application of these principles as an actor on stage, screen, and television. His fans remember him as Sean McAllister on The Colby’s, Trent Becker on Days of Our Lives and the multiple roles he played in his one man play, Jack’s Hat, here at TASN.