“baby, who’s got the baby…and who’s going to find her and collect the reward?”

Psychic Madame Lacy Eugenia is using her “gift” to find the kidnapped grand-baby of a local millionaire despite Sheriff Buckman’s belief that she is a fake and her information comes not from beyond the grave but from her best client, his mother. Her efforts are interrupted by the arrival of her estranged daughter Sophie who is on the run from her abusive boyfriend Eddie. When Eddie shows up, things are bound to get…complicated. Even the presence of “The Amazing Ira,” a stage magician/ventriloquist and Lacy’s long-time companion, isn’t enough to keep Eddie in line. Baby. 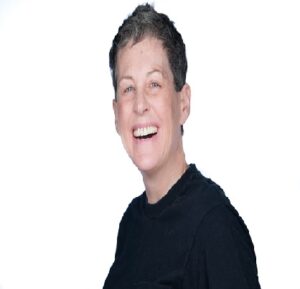 Steph grew up on Cape Cod and live there still with cats Ruff and Pixie.

She’s had no formal instruction in playwriting. Instead, the many, many terrific hours she spent studying, performing in and attending shows at the Harwich Junior Theatre comprise the majority of her theatrical training. She was also a proud member of the Bless The Mark Players, and the invaluable instruction in improv performing she received while working with them has greatly influenced her writing. She also keeps her hand in by performing in community theatre and puppeteering at the Edward Gorey House Museum!

Although she also write for adults, for 12 years she and her very good friend/collaborator/director Karen McPherson ran the Chatham Middle School Drama Club because she loves introducing kids to the joy and magic of creativity and performing. Sadly, they had to bring the curtain down on that project when the school merged with neighboring Harwich and they lost their spot. She learned a lot and had so, so much fun. Her favorite part of writing for young audiences is incorporating audience participation into her scripts.

She really surprised herself by writing three new plays (well, two with a major rewrite of the third but three sounds better, doesn’t it?) during last year’s lockdown and all that hard work is paying off:

“Sleeping Beauty Stays Awake” is one of the three winning plays in the 2021 Old Miner Children’s Playwriting Contest!

Her biggest hit is “I Hate Shakespeare!” and other popular works include “Once Upon A Wolf,” “Nick Tickle, Fairy Tale Detective” and “The (Almost) Totally True Story Of Hansel And Gretel.” The Harwich Junior Theatre commissioned her most recently published script “Never Eat A Talking Lobster.”

Steph doesn’t just write for children. Her adult thriller “Cannibals Alone” has been staged several times but she is most excited about her comedy/thriller “Red Herrings” which won the Phoenix Stage Company’s New Play Contest in 2014. Amateur Stage Magazine said, “Red Herrings is a clever and funny romp which pays homage to murder mysteries of the fifties and sixties and is great entertainment.”