Welcome to the TASN Radio Plays

The first of two weekends of TASN Radio Programming starts the end of this month! You will be able to tune into them on the TASN website. They will be aired on the designated dates over the course of two weeks, and will include powerful dramas, terrific comedy and a vintage radio remake.

Where: Link from the TASN website
You will be sent a link to a TASN website page where the radio programs can be heard on the designated dates

Admission: Free – although donations are welcome.

An estranged couple meet again – in a hospital room. One needs the truth, before it’s too late.

Written by Eric Coble
Directed and Produced by Sanford Farrier

Who knew Joe Pesci was a made man in Greek mythology?

There’s a legend in the dark hills of western Maine where a lumber town once prospered, until the 1930s Depression turned the settlement into a ghost town. These days the old railroad bed is used by cyclists and four-wheelers, skiers and snowmobilers, but the abandoned stone bridge that watches over them isn’t always abandoned. This is the legend of The Bridge Girl. 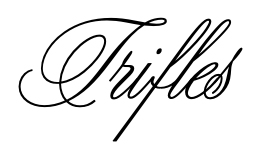 Trifles was first performed in 1916 by the Provincetown Players and remains a near-perfect example of dramatic plotting and character development. Although Susan Glaspell’s work has been overshadowed by her colleague Eugene O’Neill, she was a prolific writer of fiction and essays as well as drama, and she received the 1930 Pulitzer Prize for Drama for her play, Alison’s House.

A play about men, women, murder and small things – that are not.