Terezin, Children of the Holocaust 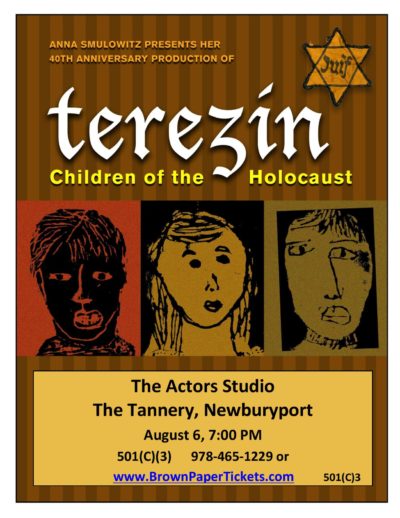 Terezin Children of the Holocaust by Anna Smulowitz will be presented at The Actors Studio of Newburyport (TASN). This award-winning play is set in a diabolical, false fronted prison camp, a town known of as Theresienstadt in Czechoslovakia. The year is 1942. The story is of six children and the truths they face in the two days leading up to their deportation to the death camp at Auschwitz, Poland. In achingly childlike ways, these characters reveal the resilience of the human spirit and the psychological barbarism of the Nazi war machine. There will be a talk back after the performance.

This is the 48th anniversary of the play’s original production in 1971. The play won the 1984 American Children’s Television Award and has been performed at Terezin for the child survivors and their families, and at Auschwitz, Poland as part of the 50th anniversary commemoration of the liberation. Translated into German and Spanish, Terezin has been performed in high schools in Central America and has toured all over New England High Schools.

Terezin received five stars at the 2011 Edinburgh Fringe Festival and enjoyed an Off-Broadway run. In March 2016 the tour production opened in Havana Cuba.