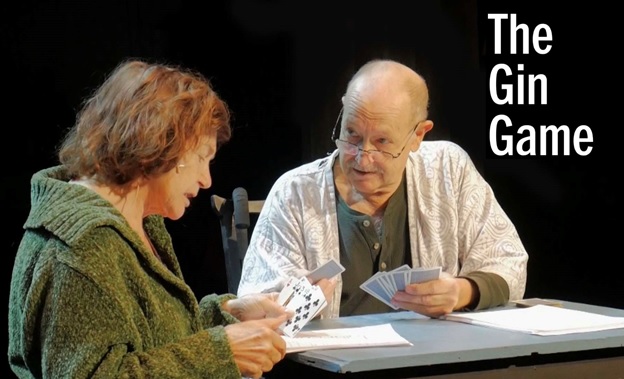 Two people playing gin rummy in a run-down rest home may not sound like a recipe for compelling drama but hand it to a pair of seasoned actors, like Richard McElvain and M. Lynda Robinson, and you’ve got a play that’s worthy of the 1978 Pulitzer Prize for Drama.

Their powerful performance proves that D.L. Coburn’s The Gin Game hasn’t lost its visceral bite, as evidenced by its powerful staged reading at the Newburyport Firehouse Center for the Arts earlier this fall, where the two theater veterans dealt out heavy drama, blended with rich comedic seasoning.

Coburn brings his deeply affecting tale onto a marathon card game where the two actors become friends over an obsession with gin rummy.  The Pulitzer Prize Award winning play uses the card game as a metaphor for life. As an aging couple in a seedy nursing home play the game, the intimacies of their past spill forth like the cards from the deck as they reach out to make some sense of their damaged lives. Through rich dynamic, their relationship builds slowly – until the play’s explosive ending.

Video-taped with three cameras, you can now view the performance from the comfort of your home.

Boston Reads, The Actors Studio of Newburyport and The Firehouse Theatre of Newburyport are collaborating in a season of three readers theatre presentations. Readers Theatre is a storied theatrical form that celebrates the essential interaction between the actor and the text of a play. It is done script in hand and with very little, if any sets, costumes, lighting, sound or props. In a good Readers Theatre production, the audience’s imagination does the brilliant work of supplying these elements.

Jointly sponsored by Newburyport’s Firehouse Center for the Arts and The Actors Studio of Newburyport, The Gin Game is the inaugural play of the Boston Reads season in Newburyport.  This staged reading is performed by storied Boston actors M. Lynda Robinson and Richard McElvain who are also the founders of Boston Reads.

When: January 7, through January 10, at any time
Where: YouTube Link
Admission: Free – although donations are welcome.

You will receive the YouTube link with the registration confirmation.