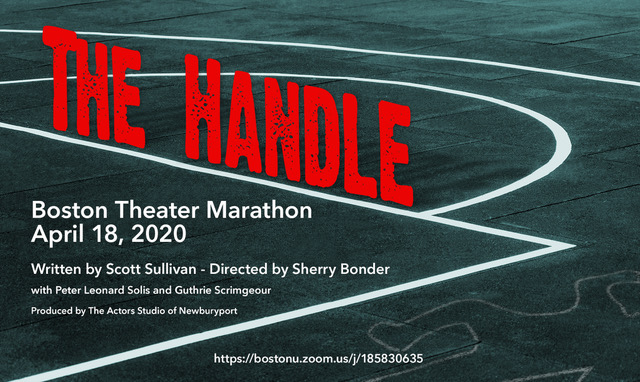 OUR PLAY “THE HANDLE” is up FIRST at NOON!

The Actors Studio of Newburyport (TASN) has been selected to perform a 2-person play entitled “The Handle” written by Scott Sullivan, directed by Sherry Bonder and produced by TASN at the Boston Theater Marathon (BTM), an award-winning, all-day marathon of new 10-minute plays. “The Handle” was selected from more than 400 entries from New England playwrights.

THIS YEAR IT IS A VIRTUAL MARATHON!

The Handle by Scott Sullivan
Danny, 17 (played by Peter Leonard Solis), and Anton, 23 (played by Guthrie Scrimgeour) seem to be two Boston guys bonding after a game of pickup basketball. On the court, Danny is known for his handle, while Anton, a young father, is known for his shooting. The play shifts, however, when Danny notices Anton’s Air Jordans. For these are not ordinary Jordans – but 17’s – the same type stolen from Danny’s father the day of his murder seven years prior. Did Anton steal Danny’s father’s sneakers? And who killed Danny’s father? As the action ensues, Danny is forced to make a choice: avenge his father’s death or stop the cycle of violence. A son needs a father.