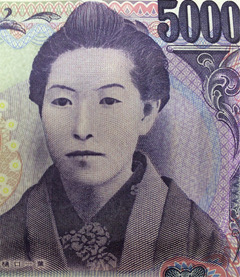 Kichizo is a boy of about sixteen whose dwarfism means he is often mocked by others of his age. He is an orphan whose only maternal figure, the woman running the umbrella factory where he worked, died two years prior to the story’s beginning. His only respite is his close friendship with a seamstress working for the factory by the name of Okyo. The pair develop a deep friendship.

However, one day, Okyo tells her young friend that she has decided to move away, the implication being that she is becoming romantically involved with someone…

Ichiyō Higuchi was the pen name of Japanese author Natsu Higuchi. Specializing in short stories, she was one of the first important writers to appear in the Meiji period – and Japan’s first prominent woman writer of modern times. Higuchi’s likeness adorns the Japanese 5000 yen banknote as of fall 2004, making her only the third woman to appear on a Japanese banknote

Back to Audio Books – Read by TASN Actors

Back to Audio Books Page